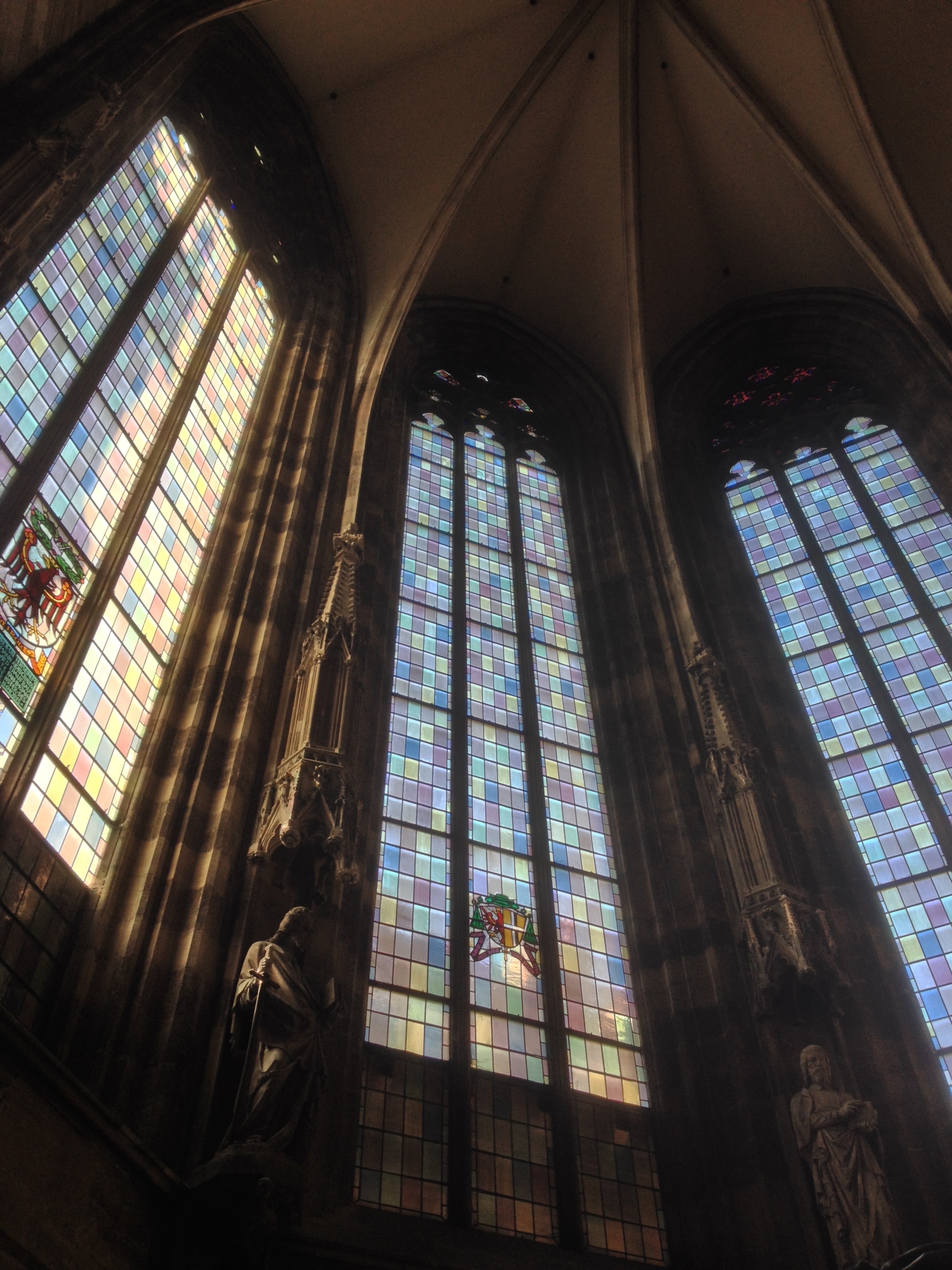 My stay in Europe could be summed up in three mornings and, respectively, three words: cake, music, and beauty.

Morning #1: Prague, somewhere not too far from Old Town Square
I ate my way through the cakes of [Eastern] Europe. It began on our first full day in Prague when my partner and I took a morning amble and stumbled across a little French café. It was called Gourmand, a tiny thing tucked away from the Old Town Square that offered a delightful tarte d’orange that has since ruined my taste for American cakes. The tart was covered with a layer of hard frosting. Its inside was filled with a crisscrossed pattern of orange bits that gave the tart a citrusy tang, not at all the artificial orange cake flavor I had been expecting. Paired with a handmade mocha at a warm table, it was the perfect way to spend my first morning in Europe. Well done, Prague. Now I know why I was in love with Europe even before I stepped foot onto this continent. Morning #4: Vienna, St. Stephen’s Cathedral
It was our first sunny morning in Europe thus far. After an intermittently rainy stay in Prague, I couldn’t help but wish that I could spend rehearsal time outside, watching the city wake up. Vienna had been stunning last night with its bright city lights and designer stores, but I wanted to see it in the relative quiet when all the hustle and bustle of the people hadn’t warmed up yet. I apologize, Vienna. There really wasn’t anything to complain about (although I was painfully aware of my tailbone after only an hour of rehearsal) what with the stained glass windows of St. Stephen’s Cathedral behind me as the sun rose above the roofs of the city buildings. The early morning sunlight bathing my music through the panes of blue, green, purple, and red glass could only be described as ethereal. It was nothing like the gorgeous, but heavy colors of the churches in Prague, where the buildings had to be lit up with hanging fixtures. The cathedral felt light, it felt hopeful. When the first notes of the organ sounded soft and deep like they were rising from somewhere almost too low for your ear to hear in this air, I felt like crying. Europe, its cities, and its culture were stunning. But this was breathtaking. Morning #8: Budapest, the 8th floor of Hotel Budapest
While the orchestra stayed up until their 2:30AM call time for the journey home on this last morning in Europe, I managed to catch two hours of sleep before my 6AM train to Salzburg. It was about 4:30AM when I woke up completely cranky. In these half-awake moments of sleepiness, I decided that the only way to ease the process was to keep the lights off and let the soft lights of the city below help reintroduce me into the world of the living. Even though the open curtains barely illuminated the room, gazing out at the slowly waking cityscape woke me up immediately. The sky was a deep, warm navy blue, the shade of blue that I like to call “my kind of blue” because I’m very particular about my favorite color. It faded down to a sweet reddish pink, one that dusted the clouds hanging above the horizon with shades of pale blue and gold. I threw the window open, disregarding the chill that flooded the room. I wasn’t about to watch Budapest wake up from behind a window. I could see street lamps, like the ones separating the closet from Narnia, dotting the view beneath me. Parliament was lit up, far in the distance. I started shivering a couple minutes later, but kept the window open. I still minded the 6AM train, but only because it meant I would have to leave my post at the window and miss the sunrise. Thank you, Budapest, for this beautiful, once-in-a-lifetime view. I will come back for you soon.